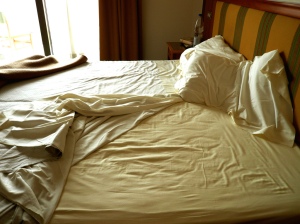 She tried to sleep. Tossed and turned on the bed. The bed that kept reminding her about him. But what was the point in thinking about him, he’s gone. After looking at the watch for the 5th time, she finally gave up on trying to sleep and got off the bed. Walking to the washroom she remembered to take her brush from the cupboard, it wasn’t there just like he wasn’t there.

But he was present in the gesture of remembering to keep her brush in the washroom. His brush was gone. She removed the thought from her mind. She concentrated on brushing her teeth. She took more time that usual keeping herself busy with the mundane task of brushing her teeth. Was it because he took so much time brushing his teeth. Hasn’t she teased him multiple times about the same? He’ll always come back with the retort, “Look at my teeth, you should take enough time to brush your teeth”. She always replied by showing off her white teeth.

“Wrong line of thought, concentrate on getting ready”, she reminded herself.

Removing the t-shirt (his t-shirt) she got in the shower. His smell still lingered on her. In her. But even after the shower she could still smell him. It’s strange how that could come to be. His smell, his presence was everywhere. She didn’t want to think about him. He’s gone. He’s not here anymore. She tried to remember that, tried to continue with her day. Isn’t she running late for office?

She quickly got dressed, picked up her bag, snatched a tissue off the study table and headed out for office. The problem with traveling/ commute is that it gives a person time to think. And even though she likes to read she never developed the habit of reading something during local commute. Bum. Now she has the time to remember that she has woken up in the middle of the night. Blabbering something incoherent. She tried to remember more about it but all she does is that he was there to calm her down and make her go back to sleep. But in the morning he wasn’t there.

Consciously trying to not think about him, she started to make a mental to-do list. She was happy with her list, which made her confident that Friday (her favourite day) will go off smoothly. But he isn’t here to make the weekend plans with. Oh well, she will meet up her friends who she kept pushing because of her hectic work schedule.

Her mind made up, she got off the train and walked towards office, her boss had called her twice already. She had meetings lined up and a busy weekend ahead. Without him. “Arggghhh, darn it!”

“Ok, put this in your head already, he’s gone”, she told herself.

Decision made, resolve set in her head. She pushed him completely out of her mind.

Her phone beeped, “Hey baby, I have landed in Chandigarh. See you in few days”.